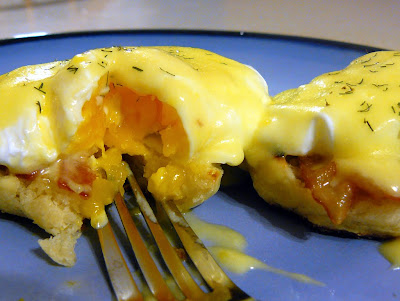 Jenn and Jill have challenged The Daring Cooks to learn to perfect the technique of poaching an egg. They chose Eggs Benedict recipe from Alton Brown, Oeufs en Meurette from Cooking with Wine by Anne Willan, and Homemade Sundried Tomato & Pine Nut Seitan Sausages (poached) courtesy of Trudy of Veggie num num.

When this month's challenge was announced I read through the introduction to the recipes and did a quick scan over the ingredients list.  What I realized when I did so was that I had nearly all of the required ingredients on hand at the moment.  Not only did I have the necessary ingredients but since I waited until the last minute to make my souffles last month, I still had the yolks sitting in the fridge waiting to be used.  Perfect!  I made a quick substitution of regular bacon for the Canadian bacon and started whipping up a batch of English Muffins since they were the only thing I was missing.  I made these within days of the announcement so it makes total sense that I am posting it at the last minute, right?  No procrastination happening over here.

I can't even begin to describe how incredible these were.  I would love to say that I will be making these often but the two sticks of butter in the sauce kind of put a halt on that thinking.  And it is a good thing that whisking the butter into the yolks was kind of time consuming (anyone else with a sore shoulder the next day?) because otherwise these would be all to easy to indulge in more often than I should.  That's not to say that I won't make these again because, wow, they were so awesome.  I wanted to eat the sauce with a spoon and probably would have if Hey, Babe wouldn't have made fun of me.  I it the same as the challenge recipe except I added a little onion powder and mustard powder to the sauce and then I topped mine with some chopped dill.  I'm actually kind of sad remembering these because they are all gone now. 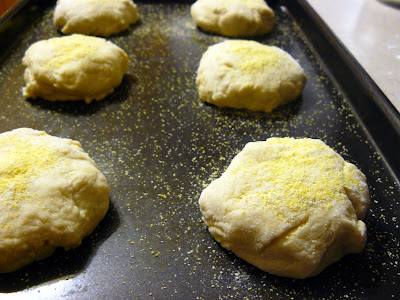 From what I understand the sauce isn't supposed to keep well but since we had leftover sauce I decided to see what would happen to it the next day.  I found that if you reheat it very gently and slowly over a double boiler while stirring, it was usable but not quite as pretty as the day before.  It didn't bother me though, and I had it over a piece of toast and a fried egg the next day.  I miss this sauce.  What I would like to know is why no one ever told me how incredible Eggs Benedict taste.

The English Muffins were also great, and relatively easy to make.  I used this recipe from Brown Eyed Baker, originally from The Bread Baker's Apprentice by Peter Reinhardt. 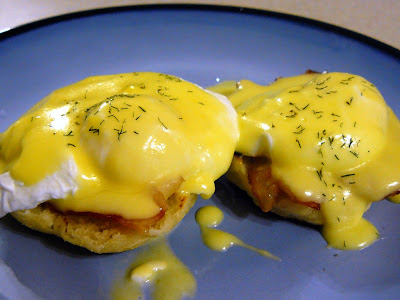 Katie Rose
I am a wife of five years to Hey, Babe and stay at home mother of 2 and a half year old Little Man and 8 month old Storm Sprite. I love to cook and bake, and have a tendency to hoard recipes. I want them all. Not that I have any delusions that I will ever try them all, but still, you never know. I am a daughter, a sister, and a friend. I am trying to live my life as an example of my Lord to my children and anyone else who happens to be in my corner of the world. 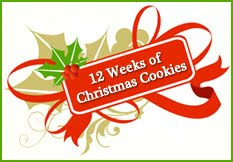